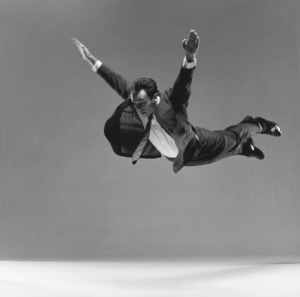 As long as I can remember, I have been connected to movement. Even as a toddler, my family would ask me to dance; communication through movement came earlier than expression through speech.

In grammar school, urban dance got underneath my skin. “Popping” and “Locking” were the first dance steps that I imitated. In the third grade I entered my first dance competition performing “the Hustle,” and won first place. I discovered the stage, and I liked it.

Junior high was all about “Disco” dancing. Groups of students would gather around to watch as I spun and dipped my dance partner. I began to teach moves to anyone with an interest. Even my brother wanted to learn to Disco – he was hoping to impress the girls, and so I taught him to disco dance.

I discovered musicals and choreography in High School. Singing and dancing to live music filled me with absolute joy. I stayed in school specifically because of my love for Choir, Dance and Art classes.

Through providence, the opportunity to attend college arrived. Unexpectedly, my high school dance teacher called to announce that she had arranged an audition for me at Cal Arts. She believed in my ability, and she felt that Cal Arts was the perfect place for me. At Cal Arts, I received my training in dance, and learned that discipline was the most crucial element to success as an artist.

In Chicago, I began dancing with three different companies. I also began to choreograph original works. Within two years I was earning my living through dancing, teaching, choreographing, and performing. I was awarded two choreography fellowships through the Illinois Arts Council, and was nominated for a Ruth Paige award for Best Dancer of the year. I toured nationally and internationally, performing and competing modern dances.

Art begins with curiosity, grows with encouragement, and takes flight with passion and perseverance. I am one of the lucky ones called by the muses – not with a whisper, but rather with a song of certainty and inevitability. Dance is my life.